All Joy and Lots of Fun 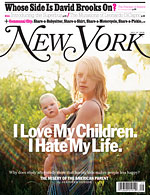 Last week’s New York Magazine cover article “All Joy and No Fun: Why Parents Hate Parenting” was a real downer – in case you couldn’t figure that out by the title – and written by a journalist (and mother), Jennifer Senior, who definitely takes the glass half-empty approach.

The article opens with a tale of woe: her 2 1/2 year old son broke the wooden parking garage she had just assembled that morning and grew impatient as she attempted to put it back together.

[He] began throwing its various parts at the walls, with one plank very narrowly missing my eye. I recited the rules of the house (no throwing, no hitting). He picked up another large wooden plank. I ducked. He reached for the screwdriver. The scene ended with a time-out in his crib.

As I shuffled back to the living room, I thought of something a friend once said about the Children’s Museum of Manhattan—“a nice place, but what it really needs is a bar”—and rued how, at that moment, the same thing could be said of my apartment. Two hundred and 40 seconds earlier, I’d been in a state of pair-bonded bliss; now I was guided by nerves, trawling the cabinets for alcohol. My emotional life looks a lot like this these days. I suspect it does for many parents—a high-amplitude, high-frequency sine curve along which we get the privilege of doing hourly surfs.

But, this isn’t just Senior’s self-pitying whine (or is it?).  She has supporting data to back up her claim that American parents hate the act of parenting, notably Daniel Kahneman‘s 2004 study which surveyed 909 working Texas women and found that child care ranked sixteenth in pleasurability out of nineteen activities (less pleasurable than housework, even), and the recent results of the UCLA’s Center on Everyday Lives of Families’ big-brother-like video documentation of 32 families 24/7 for a week. The trouble Senior lists isn’t just having to rebuild parking garages and deal with temper-tantrums.  One of the sociologists quoted in the article who discusses the “aggressive nurturing” of economically advantaged children, puts it this way:

Middle-class parents spend much more time talking to children, answering questions with questions, and treating each child’s thought as a special contribution. And this is very tiring work.

Wow.  When I first saw this article, I wasn’t sure what to think.  My initial reaction was that all of the “problems” mentioned here by parents (toddler throwing toys, elementary-aged kid not wanting to do homework) are normal age-appropriate behaviors blown way out of proportion by the parents.  And then to read that parents feel put-out by feeling as though they have to value their child’s thoughts…it’s unfathomable to me that a parent (let alone an educated parent) would feel otherwise.  But then, I’m the kind of person who tries to enjoy the small things and writes a blog about finding joy in the not-quite-there.  And I can’t help but think about some of the parenting (and parenting related stress) I’ve observed, even in my own parents, and recognize that maybe my joy makes me a minority among parents.  But how can that be?

Because he’s loving it too.

Maybe my kid is just that great?

Or maybe we haven’t filled her with enough cotton candy yet to bring out the true monster that she is?

Looking back over the research presented in the article, two things pop out at me.

First, all of the families studied had two full-time working parents.  Of course your stress level is going to be higher when you’re trying to balance two full-time jobs and raising a family.  I definitely did not hate parenting while I was still working, but I did hate housekeeping.  Since quitting my job I’m noticing that I don’t hate never-ending housework anymore – because now I don’t feel like doing it is taking away from my very limited time with Chris and Nora (and myself).  I could see how that sort of time-crunch stress could color the monotonous parenting activities as well.  Which leads me to think something I’ve thought many times before: I don’t think it’s possible to “have it all” when it comes to a career and family – something has to give, and it’s clear from these studies that happiness is what gives.  And it’s probably not just the parent’s happiness.  Prove me wrong; I’d love to see a similar study of families with one at-home parent that finds just as much dissatisfaction.

The other interesting tidbit are the findings of psychologists W. Keith Campbell and Jean Twenge

who, in 2003, did a meta-analysis of 97 children-and-marital-satisfaction studies stretching back to the seventies. Not only did they find that couples’ overall marital satisfaction went down if they had kids; they found that every successive generation was more put out by having them than the last—our current one most of all. Even more surprisingly, they found that parents’ dissatisfaction only grew the more money they had, even though they had the purchasing power to buy more child care. “And my hypothesis about why this is, in both cases, is the same,” says Twenge. “They become parents later in life. There’s a loss of freedom, a loss of autonomy. It’s totally different from going from your parents’ house to immediately having a baby. Now you know what you’re giving up.”

Being a young mother I’m not sure what I think about the idea that waiting longer makes it worse because you know what you’re missing.  Chris and I may not have chosen to wait, but we know what we’re missing, because (with the rare exception) our college and high school friends are living the life we would otherwise have.  I think I have a fairly good idea of what I’m “missing” and I don’t think I’m missing much of anything at all.  I’ve given thought, briefly, to what life might have been like if I hadn’t married Chris two weeks to the day after college graduation: moving to Dallas with a friend, working as an executive recruiter, getting drunk a lot, and dating lots of guys…but then I stop myself, because would I have really done that?  No, because that’s not who I am.  I am, in my core, the kind of person who fell in love and got married young, all on the road to becoming a mother.  I couldn’t have waited if I tried.

I was peeking into the future from the moment I put the veil on — even before that, really.

So it makes me wonder if Twenge’s conclusion is right, that these people are unhappy as parents because they know what they’re missing, or if they’re unhappy as parents because they aren’t really parents first.  Perhaps the waiting is significant not because it creates a baseline for them to compare their life now, but because it says something about their character, their core identity, and even their commitment to the act of parenting itself.

It’s a lot harder to hate something when you know it’s something you’re meant to be doing.

—Photo note:since my camera had a mishap at the beach, I’m stuck with only a cell phone.—